With red cake and white frosting (usually cream cheese), Red Velvet Cake and Cupcakes are some of the most striking of desserts.

Although Red Velvet Cake is often thought of as a Southern specialty, its origin may be a little murkier. According to Colman Andrews, author of The Taste of America, Red Velvet Cake was popular at the Waldorf-Astoria in New York in the 1920’s. This might be before it was enjoyed in the South.

How do you get the cake to turn red? Typically red food coloring.  However a pigment in cocoa powder (an integral Red Velvet component) helps the red hue along, especially when mixed with acidic ingredients.

Red Velvet is certainly a showy dessert, but is it a popular one?  The answer seems to be “yes.”

Susie, of SusieCakes Bakeries, located in both Southern and Northern California, said  her Red Velvet Cake and Cupcakes are extremely popular.

Red Velvet Cupcakes and Cake are so popular, they’re the top seller for the Bumblebee Bakeshop, based in San Francisco.

Houston-based Ruggles Cafe Bakery offers 30 different desserts on a daily basis. And Red Velvet Cake is one of the 10 most ordered desserts at the bakery.  Ruggles’ Alexia Nino speculates that one of the reasons Red Velvet is so well liked is the frosting “….. the general crowd is looking to get their cream cheese frosting fix…”

The Cheesecake Factory’s Ultimate Red Velvet Cheesecake, Distributed by Harry & David – Photo as Seen on the Web Sites of Both Companies

Of the many different Cheesecakes offered by the Cheesecake Factory, Harry & David distributes 9 different ones.  It’s probably safe to assume these are the 9 most popular flavors.  And yes, you guessed it, Red Velvet Cheesecake is in this group of 9.  (Also see the Dessert Surveillance Posting on Cheesecake.) 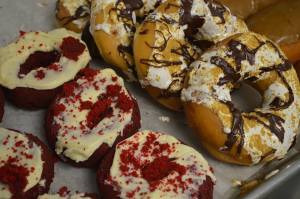 Let’s hear it for showy desserts!