If baking delectable desserts isn’t reward enough, how about getting paid for your dessert creations?  Well, you can, if you win a baking contest.

Contestants compete in one of these three categories: 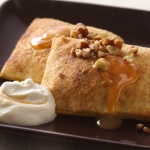 Recipes must: include seven ingredients or less; take 30 minutes or less of preparation time; and use two different eligible products (from a long list of products).  While contestants’ creativity is therefore somewhat limited, a very interesting sounding “Pumpkin Ravioli with Salted Caramel Whipped Cream” recipe took the grand prize in 2012.

The book, “Cookoff:  Recipe Fever in America” by Amy Sutherland is a fascinating look at a number of cooking contests/contesters, including the Pillsbury Bake-Off.

The grand prize winner takes home $25,000 (plus chocolate, cookies, and a book) and each of the 10 honorees receives an iPad.  There’s one category – sandwich cookies.  Not surprisingly, contestants must use Scharffen Berger chocolate. In 2012, at least one of these 12 “adventure ingredients” also had to be incorporated into the recipe:

“Margarita Moon Pies” received the grand prize in 2012 and the “adventure ingredients” used were tequila and chili pepper.

The winner receives $250,000 in addition to a cookbook contract.  It’s not a traditional baking contest.  Rather, it’s a reality TV show.  Each week the group of amateur bakers is presented with three baking challenges: “Signature Bake,” Technical Bake,” and “Showstopper Bake” and one contestant is eliminated each week.

Do you know of other baking contests with lavish awards?  Please let us know.

Currently there are about 200 single subject food books on the market and more are in the works.  I had no idea this number was so high.

Some of the panelists pointed out that single subject food books are actually not that narrow in scope.  Since only one type of food is being examined, all aspects of that food – history, business, and anthropology – can be covered.

You can see this in the book, Cake.  The Introduction to this book, sub-titled When is a Cake Not a Cake, defines “cake.”  As the author, Nicola Humble, illustrates, determining whether a dessert is a cake or another type of sweet can be surprisingly complicated.  And it can have real economic ramifications.  In the UK, in 1991, McVities, the manufacturer of Jaffa Cakes sued the UK Inland Revenue arguing that its confections were “cakes” and not “biscuits” (cookies), and therefore were not subject to VAT (Value Added Tax).  McVitie’s claim is that cakes dry out as they get stale while biscuits (cookies) soften and Jaffa Cakes dry out as they age.  Incidentally, Jaffa Cakes are small round cakes covered on one side by orange jelly and chocolate.

Other advantages of single subject food books: They’re often shorter so readers can learn quite a bit about one food subject without investing a lot of time.  From the publisher’s perspective, these books can be easier to market since it’s very clear (from the book’s title) what it will cover.

I’m waiting for a book on White Chocolate Cake!