Samples of “Walnut Witches” at the Fat Witch Bakery

Brownie purists may debate the finer points of dense, fudgy brownies versus brownies that are more cake-like.  But I think this detracts from the wider issue—the brownie versus blondie match-up.

Before I started doing brownie/blondie research for this posting, I assumed that brownies would trounce blondies in a popularity contest.  As you’ll see below, that isn’t the case. 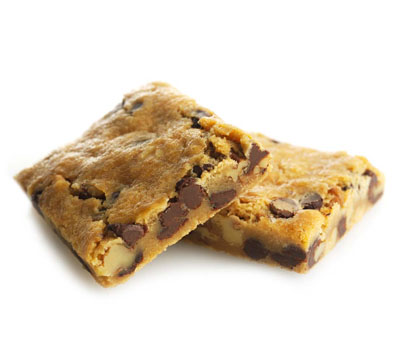 Sweet Sam’s Baking Company offers a variety of baked goods—including coffee cake, loaf cakes, cookies, brownies, as well as blondies.  Two brownies are in the line-up: a Walnut Brownie and the more popular Chocolate Chunk Brownie.  Interestingly, over the last year, sales of the Blondie were double that of the Chocolate Chunk Brownie.  And blondies have always been ahead of brownies in sales. 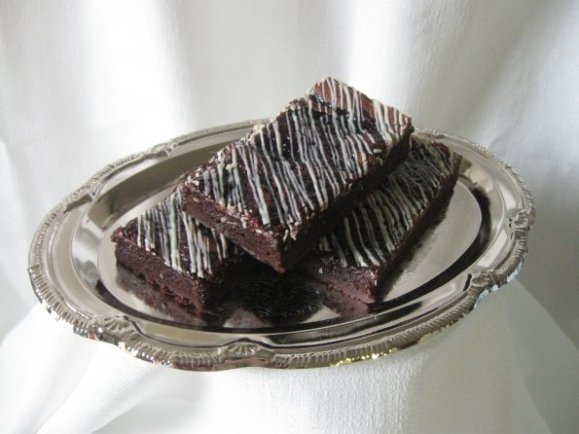 As the name implies, the Cake Sculptress specializes in 3D/sculpted cakes.  However for brownie and blondie fans, 11 types of brownies and 5 types of blondies are available.  The three best-selling brownies are: Triple Chocolate; Mint Chocolate Chip; and White Chocolate Raspberry.  The Cake Sculptress sells more Toasted Coconut Chocolate Chip Blondies than brownies.  Rebecca Goss, of the Cake Sculptress, speculates that people have become a bit disenchanted with brownies, seeing them as ordinary, though tasty, and nothing more.  However, she thinks blondies will never take the place of brownies because of the nostalgia and comfort offered by brownies.  Rebecca relayed an interesting brownie trend: brownie wedding cakes made a brief appearance as an alternative to traditional wedding cakes.

The Broadway Baker’s “Grandma’s Mix-Up Bars” sport a graham cracker crust made from homemade graham crackers.  Perched on top of this crust:  Belgian chocolate, unsweetened coconut, and crushed pecans.  A sweet cream is then drizzled over everything.  (For purposes of this post, I’ll take liberties and classify these bars as blondies.) Jim Osorno of the Broadway Baker reports that Grandma’s Mix-Up Bars are more popular than his brownie offering, “Major Brownies.”  Also see the Dessert Surveillance Broadway Baker posting. 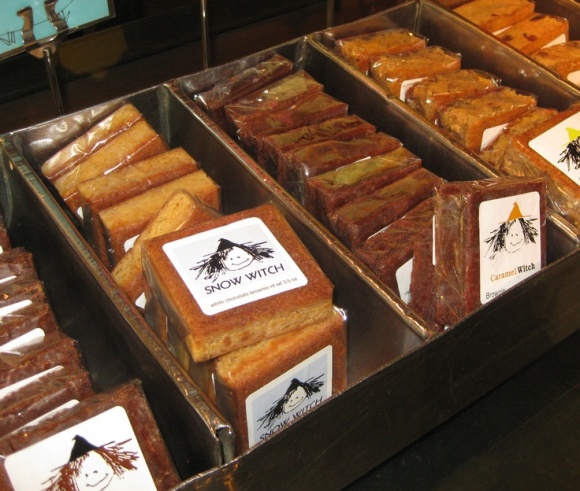 In keeping with the whimsical witch theme, at the Fat Witch Bakery, brownies and blondies are known as “Witches.” Witch types include: Fat Witch (regular brownie); Red Witch (brownie with dried cherries); Java Witch (brownie with cappuccino chocolate chips); Snow Witch (with white chocolate instead of chocolate); and the Blonde Witch (blondie).  To keep Fat Witch devotees from suffering from too much guilt, a few of the Witches are available in small sizes, known as Baby Witches.  Seasonal flavors round out the offerings: a Pumpkin Witch and Pecan Bars.  And new Witch types are planned.  Pat Helding, the founder and CEO of the Fat Witch Bakery has an interesting take on the brownie versus blondie debate: Blondies are a New York City thing so brownies will still get more points in a national popularity contest.

And of the companies above, 3 of the 4 are based in New York City, although they ship nationwide.  The Cake Sculptress is based in Massachusetts.   What does this mean?  I need to ask these questions of more companies outside of the New York City area.  Stay tuned for Part 2 of Brownies and Blondies.

And in the meantime, I have an important decision to make:  I have a brownie and a blondie in my freezer.  Which one do I scarf down now?  Hmmmm…..