I love Candy, but then again, it’s difficult to think of anything made with sugar that I don’t adore.

And I’ve always had a particular fondness for Licorice — especially Allsorts.

But what exactly is Licorice Candy?

According to Beth Kimmerle’s book, Candy: The Sweet History, Licorice is Candy flavored with the oil extract of a European or Asian Licorice root plant.  And Licorice Extract is naturally 50 times sweeter than sugar.

Robin Helfand, owner of Robin’s Candy, with locations in Boston and Great Barrington, MA, summarizes the differences between Black and Red Licorice and explains why European Black Licorice is so popular.

“Today most domestically made Black Licorice — including the classic twist enjoyed in movie theaters across the country — does include some Licorice Root essence, although anise continues to remain the predominant flavoring.  We have yet to encounter a domestic ‘Red Licorice’ made with the [Licorice] Root…..” 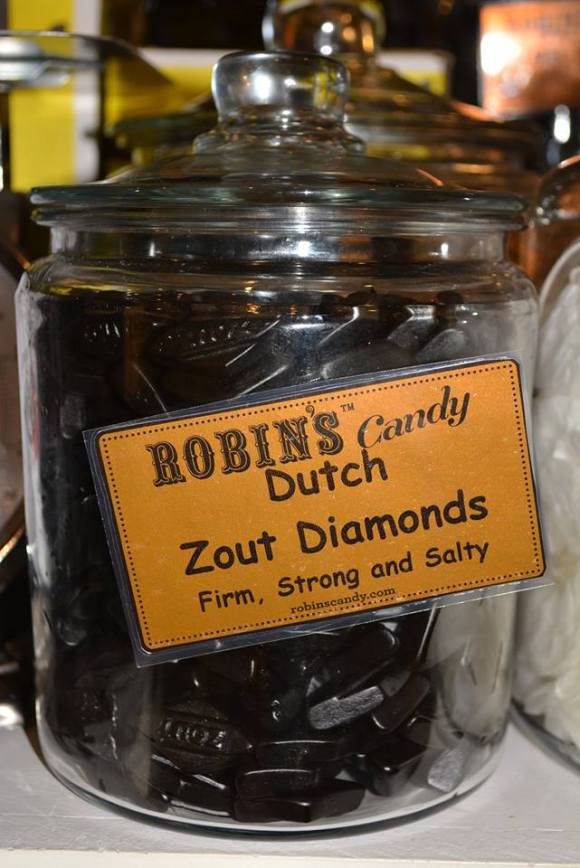 “In the 10 years since we began developing ‘Licorice Bars’ at our shops, our guests have become interested in trying more European Black Licorice — which is generally made with pure Egyptian or Sicilian Licorice root and often includes the mineral compound Salmiak (Ammonium Chloride).  Salmiak triggers the salt receptors on the taste buds and enhances the overall Licorice taste.

“Known in the U.S as ‘Salty Licorice,’ Salmiak Licorice is available in dozens of shapes and strengths — from mild Dutch Salmiakki Pastilles to firm, powerful Dutch ‘Double Zout’ Coins.  Currently, Double Zout varieties are the strongest varieties permitted for sale in the U.S.”

Robin attributes the growing popularity of Salty Licorice to an increase in the number of adventurous eaters who are eager to sample unusual, novel, and/or international foods.

Debby Adams, of Toronto-based Sugar Mountain, believes Licorice is much more than a passing fad.  She’s been with Sugar Mountain for 10 years and during that time, the Store has always carried an extensive selection of Licorice.  Debby reports that Dutch Salted Licorice is very popular with her customers.  And the most requested varieties are Dutch Coins and Double Salted Licorice.  She notes: “The thing we have learned about Licorice over the years is that people like very specific kinds and they don’t tend to move too far out of that flavor profile.”

The most requested variety of Licorice at Amy’s Candy Bar in Chicago is Soft Black Licorice.  The owner, Amy Hansen, thinks Licorice is becoming more popular because people are more open to trying it and discovering the nuances in all of the different varieties.  She usually carries between 15 to 20 different types and every few months she brings in a new type to try.  Amy thinks Licorice that is both sweet and salty is gaining in popularity in this country.

While Salted Black Licorice is becoming more popular, there will always be people (myself included) who still fancy more sugary Licorice.

Meredith of The Candy Store in Ottawa sums up Licorice preferences this way: “There tends to be two camps when it comes to popular Licorice flavors — one side is all for the Salted (Dutch) Licorice — the other is for the sweet (think Allsorts).  So it really depends on the person and their preferences.  We did carry up to 12 flavors of Licorice at one point in the store but have since decreased to around 3 or 4 varieties to free up space for some other products.  Licorice doesn’t tend to be a flavor that becomes trendy or hot at some times more than others simply because it us such a polarizing flavor. For most people, either you like it or you don’t so I find it hard to convince non-lovers to give it another chance.”

Another interesting Licorice trend was reported by Terese McDonald, founder of  Chicago-based Candyality stores.  “This spring, soda pop flavors of Licorice came to the market — Dr. Pepper, Orange Crush, Grape Crush, Hawaiian Punch, and A & W Root Beer.  They have been a big hit, especially the Dr. Pepper flavor.”  Terese notes that Licorice has always been very popular at Candyality, and it’s known for having Chicago’s first “Licorice Bar.”

I think it’s time for some Allsorts!