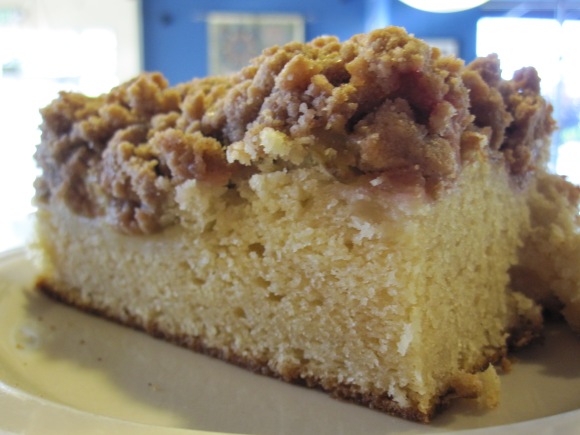 Years ago, the cakes I drooled over were gooey – rich with filling, frosting, and cream.  Now I find myself gravitating more to Bundt Cakes and Coffee Cakes. (Lest anyone become alarmed, this is NOT to say I’ve sworn off gooey cake.)

Of course the age-old question is “Why isn’t Coffee Cake made with Coffee?” After all, there’s Chocolate in Chocolate Cake.  Well, one theory is, since this Cake was often served with Coffee, it was given the name “Coffee Cake.”

Let’s start at the beginning.  What is Coffee Cake?  It’s a sweet cake-like bread typically eaten at breakfast or brunch, and sometimes served warm.  Coffee Cakes often sport streusel toppings – crumbly mixtures of flour, sugar, butter, and spices.  To liven up Coffee Cakes, they may be filled with cinnamon and sugar or even cream cheese.

How popular is Coffee Cake?  And what varieties are out there? 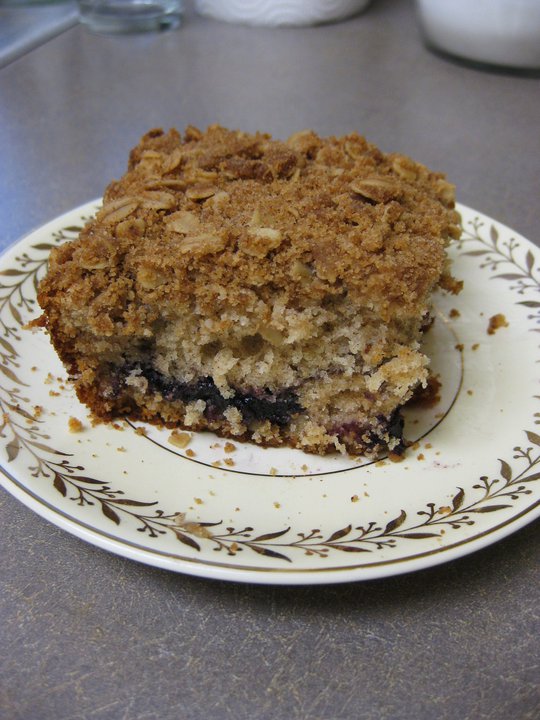 Kirsten Jensen of The Sugar Cube, based in Portland, Oregon, said the Coffee Cake is one of the most popular breakfast items. In fact, it’s called “Crack Coffee Cake” because it’s so addictive – people keep coming back for it.  Crack Coffee Cake has a moist Coffee Cake base, studded with liberal amounts of seasonal fruit.  It’s flavored with spices such as Saigon cinnamon, ginger, fresh nutmeg, and cardamom.   And it’s topped with toasted pecans, brown butter, more spices, and oats.  Kirsten believes it’s all about the crunchy topping.  She thinks Coffee Cake evokes memories of conversations had while sitting around the family breakfast table. 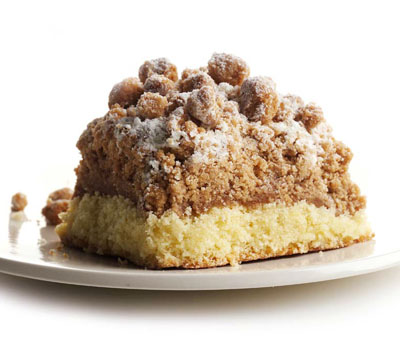 New York City-based sugar Sweet sunshine has “The Real Deal” Coffee Cake on its line-up and it’s one of the most popular breakfast Cakes.  Peggy, one of the co-owners, thinks its popularity is due largely to its cinnamon swirl.

The Swedish Bakery specializes in European-style Pastries and Cakes. While this Chicago-based bakery typically offers 10 different Coffee Cakes in its store, customers can order any of the 35 Coffee Cakes on Swedish Bakery’s Coffee Cake line-up.  The most popular Coffee Cake is the Andersonville – named after the Chicago neighborhood in which the bakery has been located for more than 80 years.  The Andersonville, a Swedish Coffee Cake, has a cardamom dough base with almond and cinnamon fillings.  Pecan Streusel, Coconut Custard, Plain Streusel, and Chocolate Chip Streusel are some of the popular American-style Coffee Cakes.  The Swedish Bakery doesn’t plan to add any new Coffee Cakes this year.  According to Eliza Williamson, the General Manager, “We like to keep it simple and traditional for our customers.  They know what they want and we’ve got it!”

In the bakery case of Chicago-based Southport Grocery and Cafe, you can find Coffee Cake.  Southport’s version is made with sour cream.  In the Cafe you can also order Grilled Coffee Cake.  The Cake is cut in half and house-made cream cheese is added.  The Cake gets caramelized on the top and bottom, while the cream cheese melts.  Jake Davis of Southport thinks Coffee Cake is popular as it reminds us of our families and spending early morning hours huddled over a pan of fresh baked Coffee Cake.  And as Jake notes, while Coffee Cake is simple, you can add a little something to it, such as bacon crumble, fruit jam, etc., to take it to a whole new level without going overboard.

I’m ready to bake, or better yet, eat, Coffee Cake!